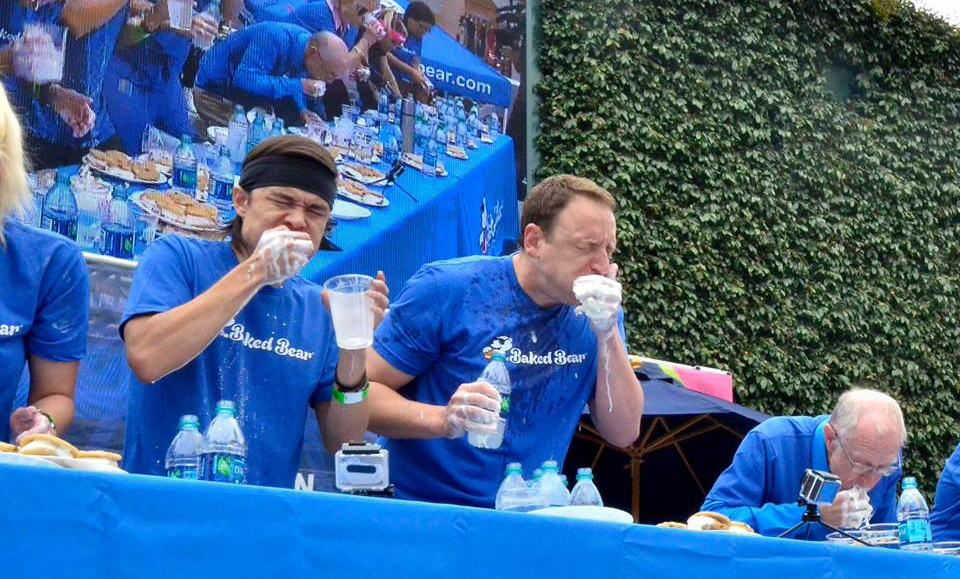 Joey Chestnut accomplished a feat that will likely never be seen again. On Friday, June 1st in Philadelphia, PA Joey took the stage and set a new world record for Hostess Donettes with an astonishing 257 Donettes in just 6 minutes. As fantastically tasty as these mini donuts are, they are not easiest food to eat especially in this quantity and at that speed.

After edging out upcoming rival and #2 eater in the world Carmen Cincotti, Joey claimed another victory etching his name forever in record books. Thankfully as he was leaving the event he was not detained by police because there were thousands of eye witnesses that the powdered substance all over his face was indeed powdered sugar and not anything of an illegal nature.

And if that wasn’t glory enough for one weekend, Chestnut then jumped on a plane headed to San Diego to compete just 2 days later in The Baked Bear Ice Cream Sandwich contest. This was a heated match with long time rival and fellow San Jose resident Matt Stonie. Stonie was ready for battle and was cold on Chestnuts trail when the horn sounded and Chestnut was named champion. Chestnut set a new world record with 25.5 Baked Bear Ice Cream Sandwiches in only 6 minutes.

Two world records set in just 3 days time. Anyone wondering if Chestnut is ready for July 4th can rest assured that the greatest eater in the history of the world is ready for the big stage. See you all July 4th!